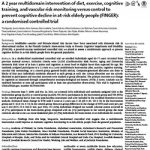 A 2 year multifaceted intervention study took place between Sept 7, 2009, and Nov 24, 2011, where 1260 individuals were randomly assigned to an intervention group (diet, exercise, cognitive training, vascular risk monitoring), or control group (general health advice) and neuropsychologically assessed throughout the duration of this study.

The results of this study suggest that “intervention could improve or maintain cognitive functioning in at-risk elderly people from the general population” (Ngandu, et al.). 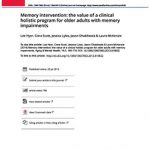 2014—“Memory intervention: the value of a clinical holistic program for older adults with memory impairments”

The authors of this study applied a comprehensive memory improvement program that was applied to 1 different cohorts; pre- and post- evaluations on “memory (List Learning, Story Memory, Coding, Digit Span, Recall, and Recognition) and function (Functional Assessment Questionnaire)” were examined as a measure of success. The program consisted of “targeting concentration, as well as mindfulness, exercise, stress reduction, socialization, diet, and values/identity techniques” (Hyer, et al.).

Outcomes of this study suggest a holistic memory improvement program targeting modifiable risk factors of patients with impaired memory can be impactful on older adults. 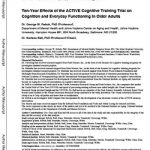 Intervention Groups– 10-session training for
1. memory (e.g., remembering word lists, sequences of items, text, and story ideas)
2. reasoning (e.g., finding the pattern in a letter or word series and identifying the next item in a series)
3. speed of processing (e.g., visual search and identification)
4. controls had no training

The results from this study were that immediately after training: 87% of the speed training group, 74% of the reasoning group, and 26% of the memory group showed improvement in the skills taught. At a 5-year follow-up, those who had memory training did 75% better on memory tasks than the control group; Reasoning – 40% better; Speed of processing – 300% better! For a 10-year follow-up:, those who had developed MCI did not maintain significant improvement in memory, but did maintain significant improvements in reasoning and processing speed. 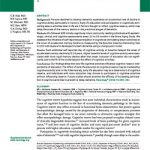 As a follow-up to the Bronx Aging Study, published in 2003, researchers examined 101 participants that were cognitively normal at baseline and developed dementia at 5-year follow-up. Subjects rated the frequency of participation in cognitively stimulating leisure activities. Cognitive activities included: reading, writing for pleasure, doing crossword puzzles, playing board games or cards, participating in organized group discussions, and playing musical instruments.

Frequency was scored as daily, several times per week, once weekly, occasionally or never

The results of this major study showed that those that reported frequent participation in cognitive activities (11 activities per week) had their cognitive decline delayed by 1.3 years compared to those who reported only 4 activities per week. They controlled for education and determined it was not a contributing variable. 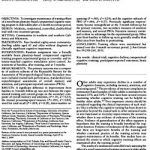 2011—“Improvement in memory with plasticity-based adaptive cognitive training: results of the 3-month follow-up”

This study investigated the effects of a novel brain plasticity-based computerized cognitive training program in 487 subjects aged 65 years and older with no cognitive impairment.

Assessed memory and attention with RBANS

The results of this study showed that auditory memory and attention improved significantly greater (p = .02) in experimental group than control group.